If you hear about the “bikini bridge” gap, here is the most important thing to remember – the bikini bridge isn’t a real thing; the current bikini bridge frenzy is a hoax, dreamed up by the folks over on the 4Chan /b/ board. Of course, it’s getting so much traction that the bikini bridge could well become a thing.

It all started on 4chan, when some evil genius decided to create a new meme – the “bikini bridge” – that was intended to rile up the feminists and the anti-feminists in one go. So they created the bikini bridge campaign.

The bikini bridge is, supposedly, when a woman is slender enough that when she lays on her back, her hip bones protrude higher than her belly – enough so that her pants (or bikini) creates a ‘bridge’ from hip to hip, with a gap between the ‘bridge’ and her belly.

See? Seems like it could be a real thing, doesn’t it?

But it’s not. Or, it wasn’t. Here is the 4chan post that started it all (the below accompanied the above image when it was originally posted to 4chan)

Phase 1:
The premise is simple. Create propaganda parading the “bikini bridge” to be the next big thing (pic related). Circulate it throughout the internet. We also create reverse propaganda, denouncing the bikini bridge as an unhealthy obsession. This too we circulate throughout the internet. Our mission during phase 1 is to garner support for these social outlets. The more followers/subscribers the better.

Phase 2:
After a fair amount of circulation has been accomplished we circulate the images throughout parts of the internet known to be biased on the subject of weight (i.e. thin privilege, fat shaming etc). This should cause large enough of a stir to snowball into a fairly big subject.

What you can do to help:
>online-image-editor.com/
Font is “times new roman” and “little days” and works well with a shadow effect
>http://bikinibridge.tumblr.com/
>/r/bikinibridge
Remember quality artsy pictures that really showcase the bikini bridge for pro bikini bridge propaganda. Weird, odd, or pictures showcasing the lack of a bikini bridge for anti bridge propaganda. Also use slogans that have already been popularized(“Health at Every Size”)
>Fake Facebook, Twitter and other social accounts
To help circulate the propaganda. The more friends the better.

If youre feeling lazy
>Good slogans/text suggestions/pic
>Spread the word (casually)
Through facebook/twitter/tumblr and other media outlets
>Post a picture(dont spam, but think passive repition)

Remember:
You do not have to push either side, even just mentioning “bikini bridge” or a slight preference will create a buzz. In fact, most often it is beneficial to show no preference at all.
Think of viral marketing, and the power of repition.
#BikiniBridge2014 can be pushed as a new years resolution ordeal. Target NYRers, weight loss pages/groups(as a “goal”), etc. These people already hold a predisposition.

tl;dr
GET IN HERE. OPERATION BIKINI BRIDGE IS A-GO.

… and quicker than you could say “Brazillian bikini wax”, social media was lighting up with howls of outrage. 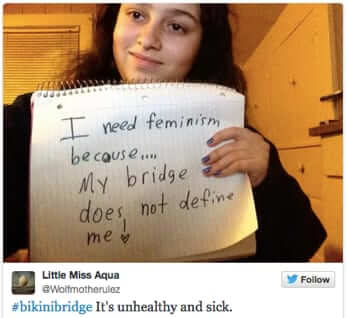 Unless, of course, that was started by the 4chan folks, and somehow hacked to backdate the images. Which is always possible.

Either way, it took the bored 20-somethings (or evil geniuses, depending on how you see them) over on 4chan /b/ to really get it going.

Next Gen 911 (NG911) and Swatting - How the New Next Generation 911 can be Exploited with Devastatin...
Rape and Murder Tweeted Over Twitter Was a Hoax
Have Google and Apple Secretly Installed a COVID-19 Tracker on Your Smartphone?
Full Text of Donald Trump's 14-Page Letter in Response to Jan 6 Committee Subpoena
Facebook Privacy Disclaimer Not Worth the Paper It's Written On
Facebook to Start Identifying Hoaxes for You in Your News Feed
Scam calls 101
Share the knowledge

Number of people who have enjoyed this article: 4,938