Ok, first, yes, I admit it. In the form of the newish iPhone 4S, the iPhone finally had enough chops to lure me to try one out, to even consider abandoning my beloved Android. The voice control and dictation features blow Android’s away, for both accuracy and usability. And Siri’s ability to create location-based reminders, and generally how powerful it is, were pretty compelling.

But, now there was a new dilemma: which is better? The ATT iPhone or the Verizon iPhone? Which has the better iPhone service – ATT or Verizon? Fewer dropped calls? Faster network?

Happily, I was in a position to test the ATT iPhone 4S and the Verizon iPhone 4S, side-by-side. Here’s the run down regarding dropped calls, network speed test, and the one thing that made the choice a slam-dunk.

Bear in mind that this was one person, testing two phones, in Boulder, Colorado. Obviously your mileage may vary about all of these things, except for the one thing that made the choice obvious.

While it has been fairly well documented that AT&T has a poor record for dropped calls, and that Verizon has far fewer dropped calls, try as I might, I could not get the AT&T phone to drop a single call. This is particularly notable because Boulder is known for it’s cellular dead spots generally, and with AT&T in particular. On the other hand, up in the mountains around here, often the only carrier available is AT&T.

I tested this by having both iPhones call my existing Android phone, and keeping the lines in that call while I drove all over town. I figured for sure the AT&T phone would drop the connection, but neither phone did.

So in the final analysis, while I knew intellectually that AT&T drops more calls than Verizon, I couldn’t see it in my normal environs, so it became marked “non-issue”.

Using the SpeedTest.net app, I next tested out the speed of the two networks. SpeedTest.net tests ping time, download time, and upload time. Which network and associated iPhone 4S was faster seemed to depend on my location, the location of the test server (which you can select within the SpeedTest app), the time of day, the phase of the moon, and whether Tim Cook saw his shadow.

Sometimes AT&T was faster, sometimes Verizon was faster, and overall it seemed to be a wash.

What was interesting was that when loading something graphic-intensive or processor-intensive, the AT&T iPhone 4S rendered faster than the Verizon iPhone, even during a time that Verizon speedtested faster. I’d already be on to “getting directions” on the AT&T iPhone before the Verizon phone had even finished loading the map.

So far, there really seemed no compelling reason to choose one iPhone 4S and carrier over the other.

Until I saw this.

So there I was, testing for dropped calls, with both iPhones engaged in a conference call with my Android phone, and I picked up the Verizon phone to check my email, clicked on the email icon, and saw this: 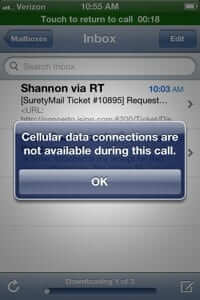 I picked up the AT&T phone (still also on the call), clicked on the email icon, and went to email (and even downloaded new email) with no problem.

I picked up the Verizon phone again, and tried again, thinking that maybe it had been an anomaly.

Nope. No anomaly. In fact, it turns out that it is a known limitation of the Verizon iPhone. You cannot do anything requiring the data network while on a voice call. Period.

So, back to Verizon went the Verizon iPhone 4S, and I am now the very happy owner of an AT&T iPhone 4S.

And I’d be remiss if I didn’t give a shout out to the very helpful people at the Boulder 29th Street AT&T store, who were absolutely fabulous, especially Kelli and Sevaro.

Cell Phone Holder for Car Uses CD Slot to Hold iPhone and Smartphones
Can't Download Gmail after an OS Update or Upgrade? This May be the Problem
Using Smartphones to Track People Under Quarantine
How to Add a Mac Contact Picture without Photo Stream or Faces
How to Export Your Mac Photos Library
What You Should Know About WhatsApp's Business App and WhatsApp Business API
How to Set up Your Smartphone as a Webcam
Bug in FaceTime Lets Callers Hear Your Audio Even if You Haven't Accepted the Call - Also How to Dis...
Share the knowledge

Number of people who have enjoyed this article: 3,152