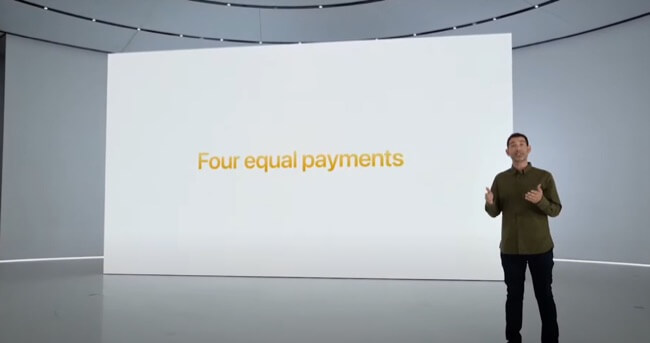 Apple has just announced its new Apple Pay Later way of paying over time (the full text of the Apple Pay Later announcement, made yesterday at the Apple World Wide Developer Conference (WWDC) is below). Now, if you thought that Apple Pay Later was a way to buy a new Apple computer or Apple device, that’s not really what it is (although it can be). It turns out that Apple is just the newest in a long series of merchants and financial institutions to have rediscovered the power of lay-away, although lay-away with a twist: you get the item right up front. (For those of you too young to remember when lay-away was a thing, stores like K-Mart (think old timey Target) would allow you to store an item, earmarked for you, at the store, and then make payments on it until it was paid off, at which point you could take it home with you.)

Apple Pay Later is an enhancement that will be included in iOS 16 because, you see, it’s an add-on to Apple Wallet. So you must have Apple Wallet enabled on your iPhone, and be using Apple Pay. Then, at participating merchants, when you go to pay (either at the register, or online), you will have an option to pay the total immediately, or to split it into 4 payments, over 6 weeks, with no interest or fees, assuming that you qualify. According to the Financial Times, Apple Pay Later, much like Apple Pay, uses MasterCard’s network.

So far Apple hasn’t elaborated on what is required to qualify to use Apple Pay Later, but given that Apple just last month acquired Credit Kudos, a UK-based credit-scoring fintech company, and Apple is announcing Apple Pay Later as an enhancement to iOS 16, coming in the fall, it doesn’t take a genius to put 2 and 2 together and get $$$.

Here’s the full text of the Apple Pay Later announcement made at WWDC (you can also see it on YouTube here).

So what do you think of this development? Will you use it? Is it encouraging consumers to make good, or bad, purchasing decisions?

“We’re thrilled to announce Apple Pay Later. Apple Pay Later let’s you split the cost of an Apple Pay purchase into 4 equal payments spread over 6 weeks with zero interest and no fees of any kind. And Apple Pay Later is available everywhere Apple Pay is accepted, in apps, and online. You can now get that espresso machine you’ve wanted, and pay for it over time with no additional cost. For developers and merchants Apple Pay Later requires no integration; it just works using their standard Apple Pay implementation. Upcoming payments are managed through Apple Wallet, making it easy to keep track of what’s due when, and to stay within a budget. And after you’ve placed your order we have another brand new feature that helps you track it: Apple Pay order tracking enables merchants to deliver detailed receipt and tracking information directly to Wallet, making it easy to get the latest information on all of your Apple Pay orders, delivered securely and privately to your device. Apple Pay order tracking will be offered at millions of merchants through ecommerce platforms starting with Shopify.”

10 iPhone Tips for Blocking Out the *Hackers* During Holiday Travel
Our Pick for Best, Must-Have iPad, iPhone and Android Game App: Draw Something
How to Make Your Mac Back Up to a Specific Drive When Time Machine is Using More than One Drive, Plu...
iPhone Photos Disappear and Reappear in Photo.app with Restoring Message
No Warrant Necessary for Law Enforcement to Access Data Stored in the Cloud
How to DESELECT All Email Messages in the Mac Mail App
Mac Finder Slow or Not Responding? What to do With A Frozen Finder
Netflix 'Watch Instantly' Not Working with Your iPad? Here's How to Fix It
Share the knowledge

Number of people who have enjoyed this article: 34