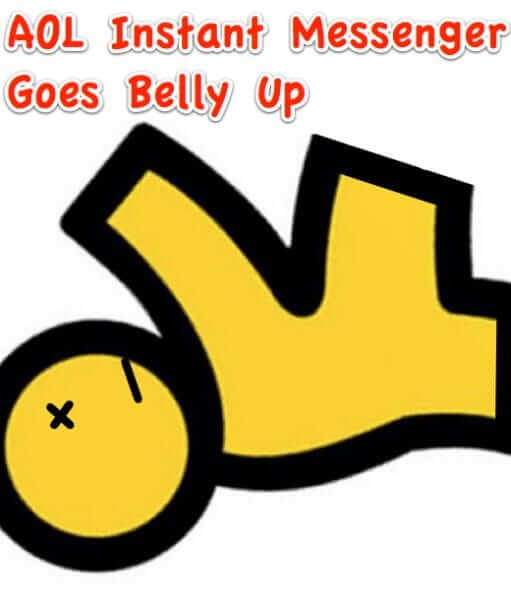 AOL has announced that they will be discontinuing AOL Instant Messenger (AIM) as of December 15, 2017 (that’s 10 weeks from today). As the iconic, and essentially first, widely deployed, widely used, and widely successful instant messenger, this has come as a shock to some, who are actively mourning AIM’s demise, and pretty unhappy about AOL getting rid of Instant Messenger.

Michael Albers, VP of Communications Product at parent company Oath made the announcement today. Which, by the way, is a Friday. It’s well known that companies tend to try to bury bad news by announcing it on a Friday. “The Friday release is a transparent attempt to evade fallout by burying bad news ahead of the weekend,” says Daniel Gross, a business, finance and economics pundit, in an article that he authored for Slate.

While the number of people who are still using AIM is not readily available, at one time 18 million people were said to be using AIM. And although some of those have been drawn away by iMessage, WhatsApp and other mobile messengers, it’s known that many users are still using AOL Instant Messenger.

And people are genuinely sad over this decision by Oath/AOL. 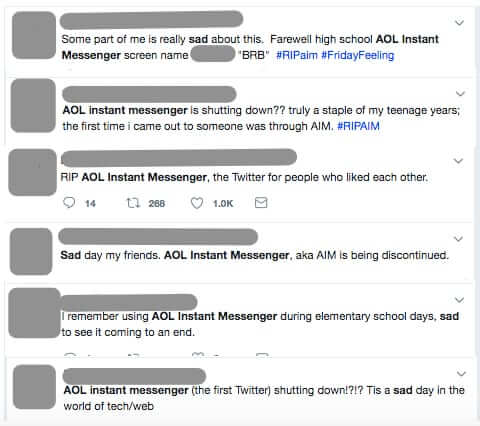 So why, exactly, is AIM being shut down?

According to Albers, it’s because “the way in which we communicate with each other has profoundly changed.”

Of course, this is a business decision, so behind that pablum observation has to be “we’re losing money on it.”

“Why is AIM shutting down?

We know there are so many loyal fans who have used AIM for decades; and we loved working and building the first chat app of its kind since 1997. Our focus will always be on providing the kind of innovative experiences consumers want. We’re more excited than ever to focus on building the next generation of iconic brands and life-changing products.”

Doesn’t really answer the question, though, does it?

Again, we suspect that the bottom line was, well, the bottom line. And remember that AIM has been around for 20 years; we would guess that the service, which grew exponentially, is patched and held together with bandaids and chewing gum. Also it is true that many users have migrated to using other chatting platforms.

Here is the full announcement made by Albers about the AIM shut-down; you can also read it where it was first posted on Tumblr.

If you were a 90’s kid, chances are there was a point in time when AOL Instant Messenger (AIM) was a huge part of your life. You likely remember the CD, your first screenname, your carefully curated away messages, and how you organized your buddy lists. Right now you might be reminiscing about how you had to compete for time on the home computer in order to chat with friends outside of school. You might also remember how characters throughout pop culture from “You’ve Got Mail” to “Sex and the City” used AIM to help navigate their relationships. In the late 1990’s, the world had never seen anything like it. And it captivated all of us.

AIM tapped into new digital technologies and ignited a cultural shift, but the way in which we communicate with each other has profoundly changed. As a result we’ve made the decision that we will be discontinuing AIM effective December 15, 2017. We are more excited than ever to continue building the next generation of iconic brands and life-changing products for users around the world.
image

Thank you to all of our AIM users. And definitely stay tuned as we’re fired up to provide more products and experiences that people around the world love.

Number of people who have enjoyed this article: 955