Ann Coulter is drawing ire after publicly tweeting the word “retard,” in reference to Barack Obama. When Coulter not only used the word publicly, but then staunchly refused to apologize for it, the community fired back in outrage, calling her remarks careless and offensive. 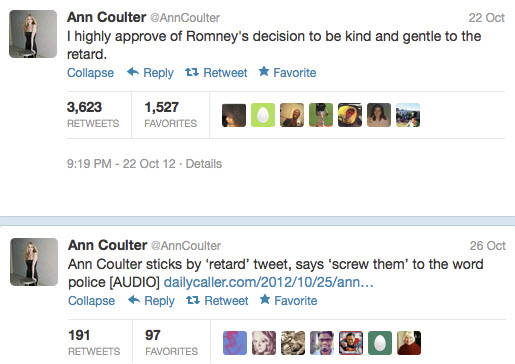 Coulter is certainly no newbie when it comes to controversy, and she is sure to be relishing the publicity that this is gaining. While appearing on the Piers Morgan show she defended her statement saying, “I was not referring to someone with Down syndrome. I was referring to the president of the United States.”

She went on to say, “I didn’t call the president a Down syndrome child. I used the word “retard” the same way people use idiot, cretin, moron and the rest of them which were all once technical terms and I’ve had it with the language police.”

But that did not fly with celebrities and the special needs community, and soon Twitter was abuzz with angry Tweeters:

Sophia Bush: @AnnCoulter You disgust me.That man is the president of this country. (& I’m sure all of the disabled children in America appreciate you.)”

Patton Oswalt: If Ann Coulter’s calling the President a ‘retard’ it means he won/is going to win. She’s our un-pettable Punxsutawney Phil.

Lauren Potter, a star of Glee who also has Down Syndrome: “Thank you to everyone who has taken a stand against the R word tonight!”

So far, fellow Republican Sarah Palin, whose youngest child has Down Syndrome, has remained mum on the whole situation, although since Coulter’s controversy broke Palin has, on Twitter:

Published a statement entitled, “Obama’s Shuck and Jive Ends With Benghazi Lies”
Called Chris Matthews, Andrew Cuomo and Jay Carney racists
Defends her use of the term “shuck and jive” as “not racist.”
Calls on Ted Turner to apologize for comments he made about our troops

But one person who did respond to Coulter’s attack was John Franklin Stephens, a 30-year old Special Olympics participant with Down Syndrome. In an open letter on the Special Olympics blog, Stephens wrote:

Come on Ms. Coulter, you aren’t dumb and you aren’t shallow. So why are you continually using a word like the R-word as an insult?

I’m a 30 year old man with Down syndrome who has struggled with the public’s perception that an intellectual disability means that I am dumb and shallow. I am not either of those things, but I do process information more slowly than the rest of you. In fact it has taken me all day to figure out how to respond to your use of the R-word last night.

I thought first of asking whether you meant to describe the President as someone who was bullied as a child by people like you, but rose above it to find a way to succeed in life as many of my fellow Special Olympians have.

Then I wondered if you meant to describe him as someone who has to struggle to be thoughtful about everything he says, as everyone else races from one snarkey sound bite to the next.

Finally, I wondered if you meant to degrade him as someone who is likely to receive bad health care, live in low grade housing with very little income and still manages to see life as a wonderful gift.

Because, Ms. Coulter, that is who we are – and much, much more.

After I saw your tweet, I realized you just wanted to belittle the President by linking him to people like me. You assumed that people would understand and accept that being linked to someone like me is an insult and you assumed you could get away with it and still appear on TV.

I have to wonder if you considered other hateful words but recoiled from the backlash.

Well, Ms. Coulter, you, and society, need to learn that being compared to people like me should be considered a badge of honor.

No one overcomes more than we do and still loves life so much.

Come join us someday at Special Olympics. See if you can walk away with your heart unchanged.

For the full text, visit the Special Olympics homepage, and perhaps leave a donation in Ms. Coulter’s name.

Social Media Campaign for Kidnapped Nigerian Girls Using Photos of Wrong Kids
Rape and Murder Tweeted Over Twitter Was a Hoax
50 Shades of Grey's E.L. James Gets Unexpected Questions on Twitter
What is "Dark Social" Media and Does it Matter?
Hater Intentionally Causes Seizure in Epileptic Reporter with "Weaponized Tweet"; Faces Federal Char...
Judge Rejects Twitter Lawsuit to be Allowed to Reveal Government Surveillance Requests (Includes Ful...
Argentina Prez sends Tweet Mocking Chinese Pronunciation of Letter R While on Diplomatic Visit to Ch...
Is It Possible to Delete Yourself From The Internet?