Have Amazon and Wikipedia struck a deal? It sure seems that way, with the roll-out of Amazon’s new “Shopping-Enabled Wikipedia pages” being displayed right on Amazon. While both Amazon and Wikipedia are being unusually tight-lipped about it (read as: nobody is admitting to anything), it appears that there is either a formal or informal deal between Wikipedia and Amazon, or else Wikipedia is foolish enough to be losing out on a huge source of potential revenue.

As you can see, the content is pure Wikipedia, but wrapped up in an Amazon wrapper: 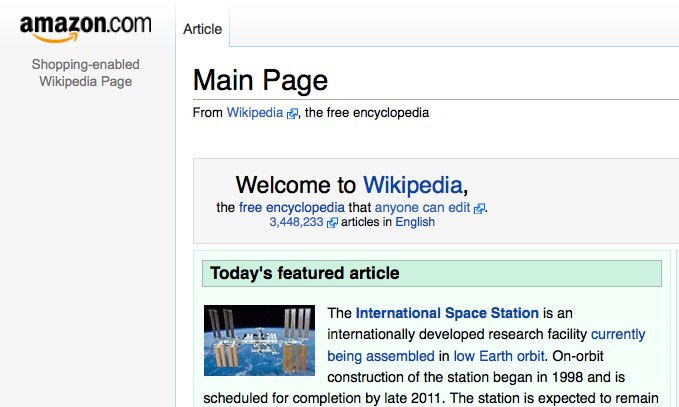 And when you hover over one of the links describing a book or other sort of media that one might find for sale on Amazon: 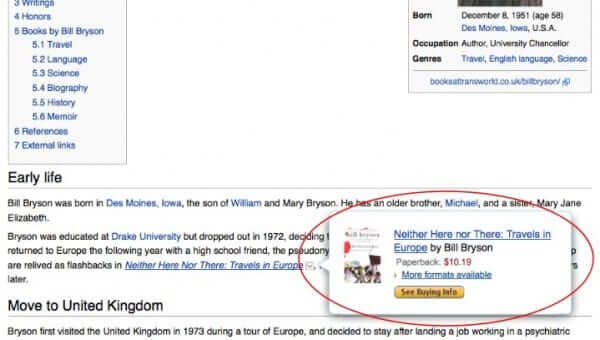 If you compare the actual Wikipedia entry with the Amazon-enhanced entry, you can see the shopping-enabled link differences:

“We’re always looking to innovate on behalf of our customers, and we’re looking at the fact that a lot of customers do research online. Wikipedia is somewhere where people can really engage and learn about an author,” she added.

According to Waring, Amazon is using the Wikipedia content under the Creative Commons license, and there is not a formal partnership between Amazon and Wikipedia. Still, if Amazon is not paying Wikipedia some sort of royalty or licensing fee (the links from the shopping-enabled Wikipedia pages do not appear to be Amazon affiliate links), then Wikipedia is, out of the goodness of their heart, missing out on a huge cash cow. That seems almost inconceivable.

At the bottom of each of the Amazon – Wikipedia pages, this language appears:

The article appearing above is from Wikipedia: en.wikipedia[dot]org/wiki/%5Brest of url]. The Wikipedia content may be available under the Creative Commons Attribution-ShareAlike License, version 3.0 or any later version, available at: http://creativecommons.org/licenses/by-sa/3.0/. Additional or other terms may apply. See Wikipedia Terms of Use for details.

How to Add Your Amazon Store Card as a Payment Option, How to Find the Expiration Date, and How to M...
How to Remove Skills from Alexa without Having to Go Through the App
Amazon Apple eBooks Settlements Hit Amazon Accounts
What to Do if Your Amazon Order Never Arrives but They Say it Was Delivered
Amazon 3D Smartphone to Be Announced June 18
With Amazon WorkMail Amazon Enters the Email Provider Space
Amazon Echo Alexa Now Lets You Create Your Own Interactive Custom Skills - But There's a Catch
Just in Time for Black Friday and Cyber Monday Our Readers Share Their Top Holiday Gift Ideas
Share the knowledge