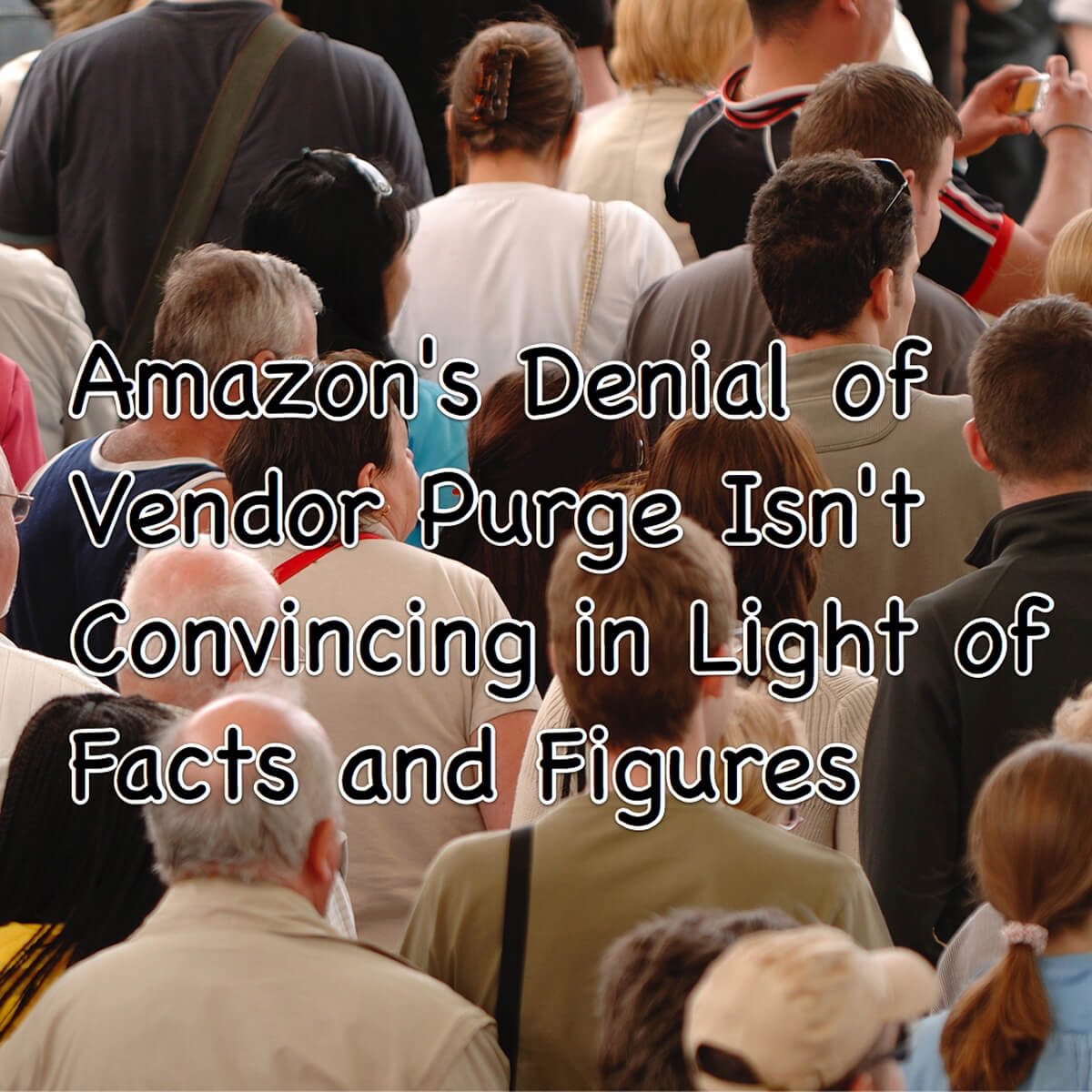 Last week Bloomberg reported that Amazon is “poised to unleash a long-feared purge of small suppliers”, explaining that Amazon is, essentially, cleaning house. This was based on Amazon stopping orders to Amazon vendors that, said Amazon, “was part of a campaign to weed out counterfeit products.” However, three people familiar with the internal workings have told Bloomberg that Amazon will be purging thousands of smaller vendors.

To be clear (even though it hasn’t been clear in the popular press), typically by “vendor” Amazon means those who supply Amazon and whose wares, in turn, Amazon sells on the Amazon site. This is different from a third-party or Amazon marketplace seller; a 3rd-party or Amazon Marketplace seller is someone with whom you are doing business directly – their product is listed on the Amazon site, and you order it through Amazon, but your order is actually going to that seller, and the seller is shipping your item to you directly. An easy way to think about it is that vendors = suppliers to Amazon; 3rd-party sellers and Amazon Marketplace sellers = selling to you.


It is the vendors that Amazon is purging. So, for example, a vendor who is supplying Amazon with Chanel purses – which turn out not to be Chanel, but counterfeit.

It makes sense, if you think about it. First, of course, there is the issue of counterfeits, which is a big problem. Also there is a cost to Amazon associated with each and every vendor it brings on, even if only the cost to monitor the vendor, complaints about their product, returns of their product, and the like. If the cost:profit balance isn’t heavily weighted in Amazon’s favor (selling lots more of the product line than it costs to track the vendor, handle returns, etc.), why wouldn’t they get rid of them?

Amazon told Bloomberg that they “review our selling partner relationships on an individual basis as part of our normal course of business,” although as this was in response to the Bloomberg piece on the predicted upcoming purge, the Amazon spokeswoman added that “any speculation of a large scale reduction of vendors is incorrect.” And they additionally told Fast Company, along with the same statement that they gave to Bloomberg, that “Like any business, we make changes when we see an opportunity to provide customers with improved selection, value, and convenience, and we do this thoughtfully and considerately on a case-by-case basis.”

However, it’s entirely possible – likely even – that there are other factors.

First of all, as we first reported here last year, Amazon is accused of cloning vendor products and selling their own Amazon version for less. Why buy from a vendor when you can sell your own and keep more of the sale, quite literally cutting out the middleman vendor?

Second, Jeff Bezos himself, just last month in Amazon’s 2018 2019 annual letter to shareholders, called out the fact that revenue from those third-party sellers has not just overtaken revenue that Amazon derives from direct sales (i.e. the stuff they sell that they get from those vendors) but that it now accounts for a whopping 58% of Amazon sales revenue!

As Bezos himself says in that letter, observing that sales by third-parties through Amazon’s site have gone from 3% in 1999 to 58% in 2018, “The percentages represent the share of physical gross merchandise sales sold on Amazon by independent third-party sellers – mostly small- and medium-sized businesses – as opposed to Amazon retail’s own first party sales. To put it bluntly: Third-party sellers are kicking our first party butt. Badly.”

And make no mistake, he wasn’t complaining. He is fine with it – he was bragging as if they were his children. And why wouldn’t he?

According to that letter to shareholders, Amazon’s own first-party sales in 2018 (i.e. sales of items that Amazon purchased from vendors and then Amazon sold directly to you) totaled $117 billion. That means that the sales through third-party sellers were more than $160 billion.

Now, if you were Amazon, wouldn’t you put more focus on those third-party sellers, and get rid of the small potato vendors?

You might think that getting rid of Amazon vendors and giving more business to Amazon third-party sellers would be a boon for those third-party sellers on Amazon. However, that’s not how some third-party sellers see it. It’s a dog-eat-dog world in there, where sellers of similar or identical products have to compete for the eyeballs and orders of those Amazon customers. Amazon has already had such a problem with fake Amazon reviews, and you might be surprised to learn that it isn’t always good reviews that are fake; sellers will arrange to have someone post bad reviews on their competitors’ pages, and to have people vote down positive reviews on those same pages.

And as if that isn’t enough, eCommerce Platforms reports that “Chinese sellers are flooding the [Amazon] marketplace thanks to preferential treatment from Amazon and the USPS. Because their costs are lower, Chinese sellers are underpricing and outselling U.S. competitors in their own backyard.”

When you consider that Amazon added a whopping 1,029,528 new third-party sellers in 2018, according to Feedback Express, existing Amazon Marketplace sellers do indeed have something to be concerned about.

And concerned they are. As one seller, calling himself ‘Echo Bravo’ (EB in military alphanum), put it on the Amazon Seller Central forums, “This is going to be a nuclear bomb to all the RA and ‘Authorized Sellers’ ” (‘RA’ stands for retail arbitrage, which is when you buy new stuff somewhere, and then resell it on Amazon (or eBay or wherever).)

Observed another, nicknamed MuzicStuff, “And yet, Amazon-provided customer support for third-party vendors is at an all time low.”

Somehow, that seems to fit right in with a minimizing expenses, maximizing profits business goal. Expecting anything more of Amazon, which is, after all, a business that is charged with making profits for its shareholders, is almost certainly destined to be an exercise in disappointment.

Technologies that Will Shape Your Internet Use in the Future
What to Do if Your Amazon Order Never Arrives but They Say it Was Delivered
Amazon Acquires Pill Pack Pharmacy Making Amazon as Full Service as Walmart, Target and Costco
Amazon is Buying Whole Foods
Complete List of Amazon Echo IFTTT Recipe Connections, Services and Actions
Amazon Echo Series – Part 4: Amazon Echo Smartthings plus Amazon Echo IFTTT Recipes and Hacks to do ...
Amazon Grabs for .Amazon Domain over Objections of Amazon River Countries
Now You Can Drop Off Amazon Returns at a Kohl's Near You
110shares