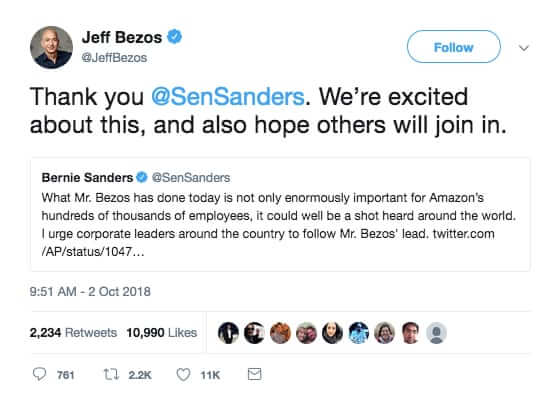 ﻿﻿As the holiday season approaches, the low unemployment rate has employers – especially those involved with retail – scrambling to hire workers. Amazon has figured out a novel way to bring in more new employees: pay them more. And so, Amazon announced today that effective on November 1, 2018, all U.S.-based Amazon employees, across the board, will be earning a minimum of $15.00 per hour.

In an announcement on their corporate blog, Amazon makes clear that when they say “all U.S. employees” they mean all U.S. employees, even ones, they say, that come to them through temp agencies.

Said Amazon founder and CEO, Jeff Bezos, “We listened to our critics, thought hard about what we wanted to do, and decided we want to lead.”

Amazon has been criticized in the past for too-low wages, especially for the conditions under which some of their employees work.

Added Bezos, “We’re excited about this change and encourage our competitors and other large employers to join us.”

And join them they most likely will have to (and talking like Yoda we are). As the Washington Post points out in an article titled Ripple effect? Amazon’s $15 wage may help lift pay elsewhere, “Amazon’s announcement Tuesday that it will raise its minimum wage to $15 an hour will intensify pressure on other companies to lift their pay levels as well. Among the most likely to do so: Amazon’s rival retailers and warehouse operators, many of which are facing the prospect of staff shortages as they ramp up for the holiday shopping season.”

In their statement, Amazon says that they are also going to start pushing for a raise in the Federal minimum wage, which is currently set at a measly $7.25/hour.

According to Jay Carney, a Senior VP with Amazon, “We will be working to gain Congressional support for an increase in the federal minimum wage. The current rate of $7.25 was set nearly a decade ago. We intend to advocate for a minimum wage increase that will have a profound impact on the lives of tens of millions of people and families across this country.”

Not everybody is thrilled about either Amazon’s raising their own minimum pay to $15 an hour, nor about Amazon advocating for a higher Federal minimum wage.

In their article, the Washington Post quotes Buffalo, New York staffing agency owner Darren Moscato, who says that the Amazon pay increase “will make it harder for local businesses to compete for workers.” Amazon has a warehouse in Buffalo.

In addition, Moscato doesn’t think that Amazon pushing for a new, higher Federal minimum wage is altruistic on their part. He says it is because it will give Amazon a competitive advantage, noting that smaller companies have to spend more on labor because they don’t have the automation infrastructure that Amazon does.

Employees, however, are understandably delighted with the wage boon, and they aren’t the only ones.

Vermont Senator Bernie Sanders tweeted “What Mr. Bezos has done today is not only enormously important for Amazon’s hundreds of thousands of employees, it could well be a shot heard around the world. I urge corporate leaders around the country to follow Mr. Bezos’ lead.”, to which Bezos responded “Thank you @SenSanders. We’re excited about this, and also hope others will join in.”

What do you think of this development? We especially want to hear from you if you work in retail, or for one of Amazon’s big box competitors, or, for that matter, even if you don’t!

Number of people who have enjoyed this article: 581