Amid a scandalized outcry, Amazon this week stopped selling a book entitled The Pedophile’s Guide to Love and Pleasure: a Child-lover’s Code of Conduct, although they continue to sell an apologist treatise on the same subject. The former, self-published by Phillip Greaves, and the latter, written by David Riegel and published through the interestingly-named Safehaven Press, are at the center of the current tension between freedom of speech, protection of children, and Amazon’s duty, if any, in both.

Amazon does, in their guidelines, reserve the right to ban content that it deems “objectionable.” The pedophile’s how-to apparently did not rise to the level of Amazon’s standards of “objectionable” though, as prior to ultimately yielding to pressure to remove the title from their offerings, Amazon said in a statement that “Amazon believes it is censorship not to sell certain books simply because we or others believe their message is objectionable. Amazon does not support or promote hatred or criminal acts, however, we do support the right of every individual to make their own purchasing decisions.”

However after receiving thousands of complaints about the book through their comments system, Amazon apparently decided to stop offering the book for sale.

The The Pedophile’s Guide to Love and Pleasure‘s page as it was:

The page is no longer available

Some of the hundreds of comments about The Pedophile’s Guide: 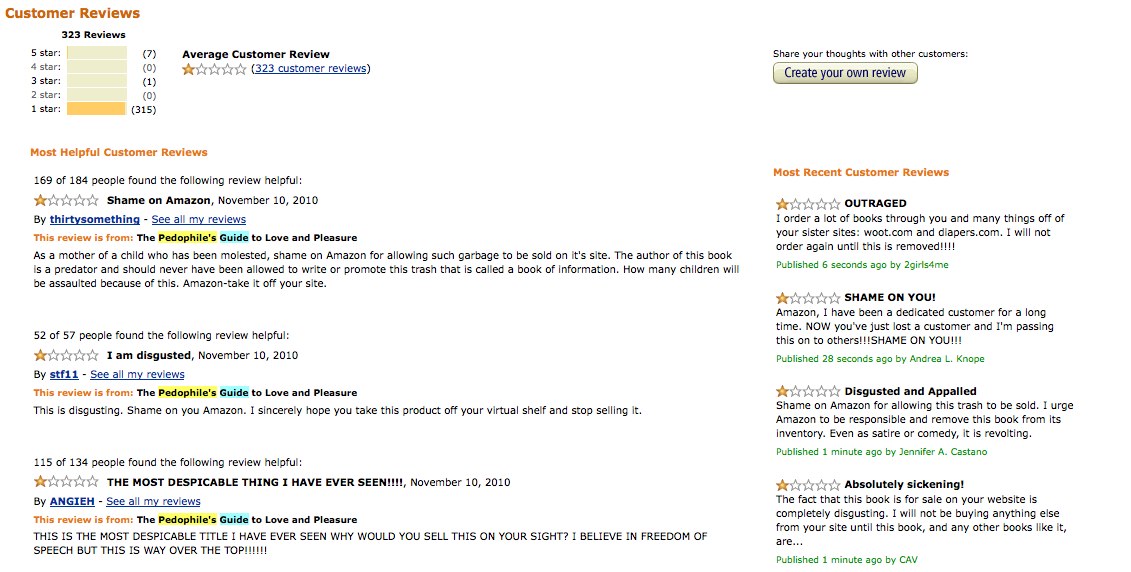 This book, however, is still available through Amazon:

So what do you think of this issue? Was Amazon right to remove the book? Should they ban the second book as well? Should they continue to sell both of them? One of them? Tell us what you think below.