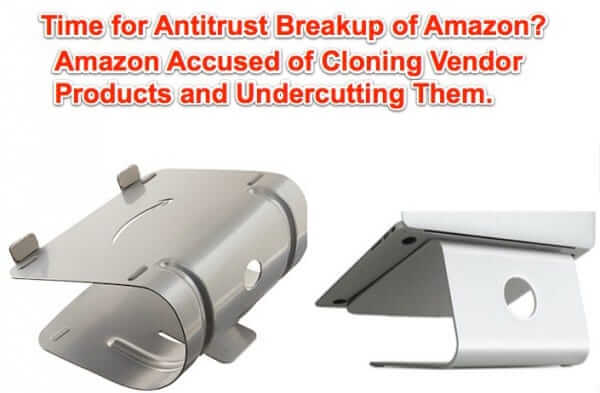 Some legal experts are saying that it’s time for Amazon to be broken up into separate entities under antitrust laws, pointing to Amazon’s ripping off of vendors in the Amazon Marketplace as an example of Amazon’s reach having gone too far.

Amazon has its fingers in more pies than you can shake a stick at (to mix a metaphor). Some of those pies include groceries, meal kits, in-home deliveries, home services, fantasy adventure games, cloud storage, the Amazon acquisition of Whole Foods, and of course, books, audio books, and other merchandise on their primary platform.

Last year, with little fanfare outside of the legal community, Yale Law School Research Fellow Lina Kahn published an article in the Yale Law Review that should make others sit up and take notice (it also received the Michael Egger Prize from the Board of Officers of the Yale Law Journal for best note on an outstanding current social issue). In her article, Amazon’s Antitrust Paradox, Kahn highlights an example of where Amazon has crossed the line: stealing ideas from Amazon Marketplace vendors and offering the same products itself on the Amazon website, and for a substantially lower price.

In other words, the allegation goes, Amazon is monitoring which products do well when sold by vendors on the Amazon Marketplace, and then is stealing the ideas for the products – sometimes even reproducing the product itself – and then undercutting the Marketplace merchants by offering it for less on Amazon.com.

Pillow Pets is one example of where an Amazon Marketplace vendor was doing extremely well with a particular product line… until Amazon became their competitor.

According to all accounts, including in Kahn’s law review article, and an article in the Wall Street Journal, Collectible Supplies Inc. started selling Pillow Pets (soft, squishy stuffed animals that one could use as a pillow) in the Amazon Marketplace in the summer of 2011. According to Jeff Peterson, Collectible Supplies’ owner, their sales of Pillow Pets were “robust”, with sales of as many as 100 Pillow Pets a day. Robust, that is, until just before the 2011 holiday season, when sales suddenly tanked to as few as 20 a day. And that is when Peterson noticed that Amazon was also offering Pillow Pets, and giving their Pillow Pets listings featured placement on Amazon.com.

Coincidence? It’s hard to imagine that it was, especially when you consider that, according to Peterson, Amazon was almost certainly monitoring what Collectible Supplies was doing on the Amazon Marketplace, and then continually undercutting them. Says Peterson, “I tried lowering the prices, but Amazon would always match my price or go lower until I eventually gave up.”

In the case of Rain Design’s laptop stand, Rain Designs had been selling this popular item for more than a decade, and then suddenly a knockoff appeared for half the price. Investigating, Rain Designs discovered that the manufacturer of the knockoff was none other than AmazonBasics.

As Bloomberg’s Spencer Soper points out in his Bloomberg article Got a Hot Seller on Amazon? Prepare for the E-Tailer to Make One Too, while AmazonBasics was initially just selling things like generic batteries and generic blank DVDs, “for several years, the house brand ‘slept quietly as it retained data about other sellers’ successes.” It is clear that, adds Soper, “Amazon is using insights gleaned from its vast Web store to build a private-label juggernaut that now includes more than 3,000 products – from women’s blouses and men’s khakis to fire pits and camera tripods.”

Which is a fancy way of saying that Amazon is watching what vendors are selling on the Amazon Marketplace, and then ripping them off.

In an article in the Wall Street Journal, Amazon Marketplace vendor Brad Howard, president of CuffCrazy.com, shares a similar view of what Amazon is doing.

“There are countless items that they didn’t sell before that they sell now because of Marketplace,” says Howard, adding that “It happens fairly regularly that Amazon finds a new product [on the Marketplace] to sell themselves and when they do it’s pretty much impossible to compete.”

And that last statement – it’s pretty much impossible to compete – is the basis for the calls for Amazon the monolith to be broken up under antitrust rules.

As Kahn concludes in her law review article, “As Amazon continues both to deepen its existing control over key infrastructure and to reach into new lines of business, its dominance demands the same scrutiny. To revise antitrust law and competition policy for platform markets, we should be guided by two questions. First, does our legal framework capture the realities of how dominant firms acquire and exercise power in the internet economy? And second, what forms and degrees of power should the law identify as a threat to competition? Without considering these questions, we risk permitting the growth of powers that we oppose but fail to recognize.”

Amazon Echo Invitation Goes Out with Release Date of "Several Months"
Online Black Friday and Cyber Monday Shopping the Internet After-Thanksgiving Sales
Massive Capital One Breach of Data Stored on Amazon Affects Millions
Hands On with Echo Loop - the Alexa Ring You Wear on Your Finger
Amazon Offers 'Made on Kickstarter' Section
Amazon Threatens Me with Termination of My Top Reviewer Status for No Real Reason
Amazon Lawsuit puts Fake Reviewers in the Crosshairs
Amazon Key: For When You Feel Like Letting a Stranger Into Your Home When You're Not There
Share the knowledge

One thought on “Amazon Accused of Cloning Vendor Products and Undercutting Them: Time for Antitrust Breakup of Amazon?”

Number of people who have enjoyed this article: 1,072