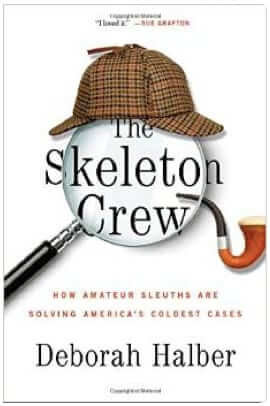 In the new book The Skeleton Crew: How Amateur Sleuths Are Solving America’s Coldest Cases, science writer Deborah Halber describes how amateur web sleuths are solving some of the oldest and coldest cold cases in the country. And there are dozens of these cases which these amateur sleuths have helped to solve, with exotic names like “The Lady of the Dunes”, “The Head in the Bucket”, and “Tent Girl”. While these cases bring the Hardy Boys or Nancy Drew to mind, these are real cases, with real victims, that have been solved by real people just like you.

As Halber explains in a recent article in Time, there are really just 5 steps to solving a murder (a real murder!) with your computer and the Internet.

The 5 Steps to Solving a Cold Case Murder with Your Computer are (paraphrased):

As it turns out, there are dozens and dozens of people doing this, some with law enforcement or related backgrounds, some with nothing more than a passion to solve a mystery. Some on their own, some as part of a group or organization, such as the Doe Network, so-named because the found victims in unsolved cases are usually named John Doe or Jane Doe.

These volunteers are the amateur sleuths helping to solve these cases, armed with just their computer, the Internet, and a desire to apply their brain and computing power to solving these mysteries – the cases that baffled law enforcement, often back when there wasn’t an Internet, and which have grown cold since.

In the case of “Tent Girl”, her identity was determined thirty years after her body was discovered, and in large part due to amateur web sleuth Todd Matthews realizing that she was Jennifer Landry, after matching Tent Girl to an Internet post by a woman searching for a long lost sister, describing Jennifer as “she has brown hair, brown eyes, is around five feet two inches tall and was last seen in the Lexington, Kentucky, area.”

In Landry’s case they had a body. In the case of the Head in the Bucket, all the police had was a skull. In that case, a trucker noticed a bucket, went to move it, and found it full of cement. Eventually a jaw bone emerged from the cement, then a skull. Based just on that skull, noted forensic artist Frank Bender was able to develop a three-dimensional bust of the likely victim: a kindly looking, greying, middle-aged man. Web sleuth (and Doe Network member) Ellen Leach helped to solve this case by determinedly searching those digital square inches (step 1 above).

At first, though, Leach actually thought that maybe they had finally found Jimmy Hoffa.

As Halber says, “Thirty years too late, her theory didn’t make a lot of sense to me, but I realized that a web sleuth’s ability to brainstorm, to extrapolate, to make leaps of faith, might be correlated to her success rate.” (See step 5 above.)

Leach abandoned her Hoffa theory, kept poring over all of the missing persons and other sites, and eventually became convinced that the man in Bender’s bust was Gregory May.

Said May’s son, Donald May, “I had almost resigned myself to never finding his remains.”

The work of an amateur web sleuth is painstaking, tireless, and often gruesome. But, it can be incredibly rewarding, giving names back to the countless Jane and John Does, and helping their grieving loved ones to finally have some closure.

So, do you have what it takes to be an amateur web sleuth and help solve cold cases? If so, a good place to get started is by contacting the Doe Network.

If you are interested in reading more, you should read The Skeleton Crew: How Amateur Sleuths Are Solving America’s Coldest Cases

7 thoughts on “Amateur Web Sleuths are Solving Cold Cases, You can Too! Read How”