Chatroulette founder Andrey Ternovskiy acknowledged that the Chatroulette video chat site that he founded when he was 17 had..problems, primarily that users of Chatroulette liked to expose themselves.

But Ternovskiy believed in Chatroulette, so strongly, in fact, that he moved to Palo Alto, the hotbed of startup funding. Nonetheless, Chatroulette essentially tanked, in large part owing to the X-rated material.

Enter Napster co-founders Shawn Fanning and Sean Parker, who have now co-founded Airtime, a randomized video-chat service which they say has all the fun of Chatroulette, without the exposed private parts. They have even managed to raise $33 million dollars in investments from top-shelf Silicon Valley venture funds.

Says Parker, “Chatroulette pushed the boundaries, and a lot of people missed that or didn’t care because they just saw the negative outcomes.”

“A lot of people just couldn’t look past the c–ks,” adds Fanning. (This is a quote given by Fanning to Businessweek – it’s not clear whether Fanning spelled it “c–ks” or BusinessWeek cleaned it up – but either way, it’s pretty clear what he means, and it isn’t “cooks” or “corks”.)

There is an interesting wrinkle however – because not only did they improve on Ternovskiy’s idea, but while Ternovskiy was still trying to make a go of Chatroulette (which is still up, by the way), they actually mentored him, and even offered him funding.

This suggests that, unless they already have some sort of ironclad licensing agreement or other agreement allowing Parker and Fanning to riff on Ternovskiy’s Chatroulette, we would not be at all surprised to see Ternovskiy v. Fanning & Parker, et al come up through the courts sometime within the next few years, particularly if Airtime is successful.

But, we’re getting ahead of ourselves.

Airtime, like so many other annoying services, requires that you log in through Facebook. In this case, though, they at least have an arguably good reason: it is their prime method for keeping all of the video chatters clothed. Their reasoning is that by requiring that you link your Airtime account to your Facebook account, you will be – no pun intended – accountable. So while there are anonymous chats between chatters, they are only anonymous to the chatters – the system knows who each of you are, meaning that if you decide to surprise your chatee by flaunting (or flogging) your unclothed private parts, you can be identified through your Facebook account.

(It was, by some accounts, in fact, Ternovisky’s adamance that Chatroulette chats should remain completely anonymous that was the sticking point in funding negotiations.)

To install and run Airtime, you can go to the Airtime website at Airtime.com, and at the Airtime home page, click the Launch Airtime button: 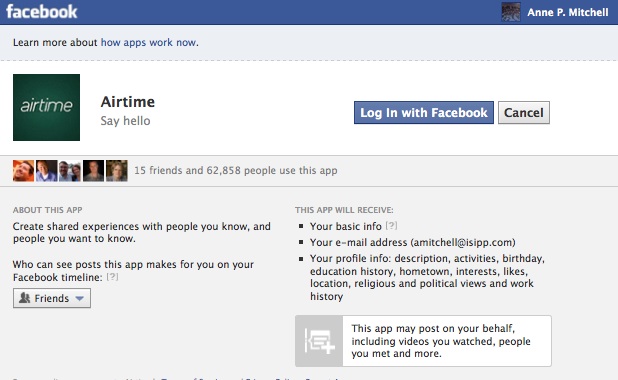 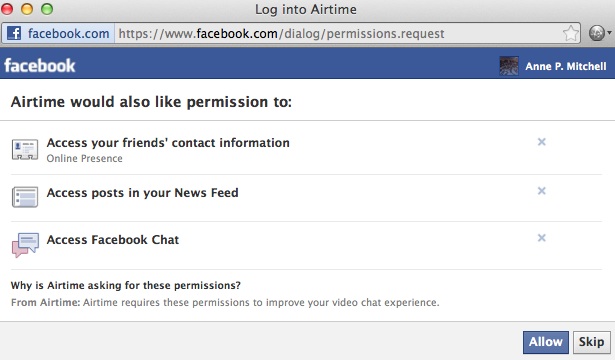 Next you have to allow the system access to your webcam:

After allowing your camera, you are taken to the Airtime home screen, where you can edit your profile. Airtime takes the pages you have “Liked” and turns them into “Interests”, and creates a default profile for you with those interests. 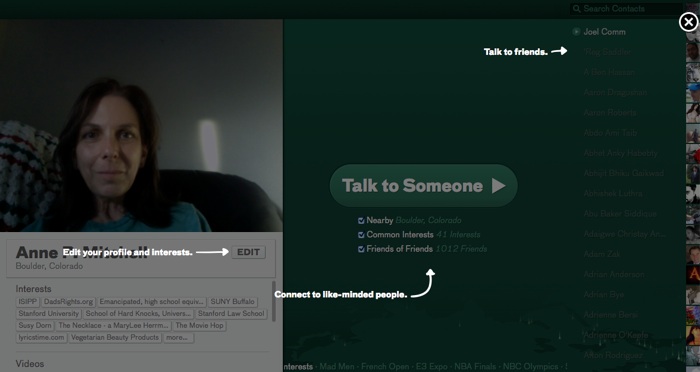 If there are interests that you don’t want to share, you can remove them from your Airtime profile by clicking on them, and then clicking on “Remove” from the popup.

After that, you just hit “Talk to Someone” to be connected to a random, anonymized Facebook user. As you can see from the screen, you can check or uncheck “Nearby”, “Common Interests” and “Friends of Friends” to help determine your video chat matchup. You can also select from your friends.

We chose to chat with a random user, and were connected to this delightful and friendly young lady. Her first question was to ask us where we are, and when we told her Boulder, Colorado, she seemed genuinely delighted – she herself was in San Francisco. (And she gave us permission to post this screenshot.) 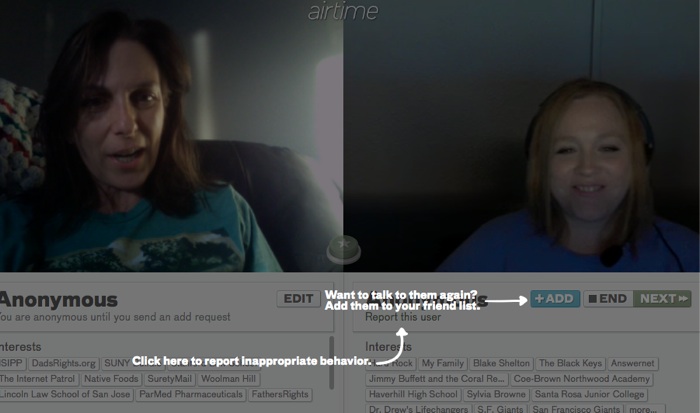 The astute among you may have noticed that we had “Nearby” checked, and yet we were matched with someone in San Francisco. 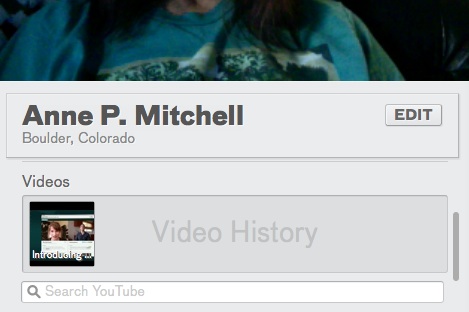 So how else does Airtime assure that people are adhering to the rules, which include, right in their terms of service, that you may not indulge in any of the following behavior:

Well, among other things, Airtime uses a state-of-the-art visual recognition software that can, it says, recognize naughty video happenings. They also take random screenshots of chats which they archive – forever – and they employ contractors to review the screen shots if abuse is reported having happened in the relevant chat.

A post on the Airtime blog explains that “Since it’s likely the two people in a matched call don’t know each other, we take periodic screenshots during the video chat to monitor for any inappropriate conduct. Screenshots are taken for all matched calls and we only take screen captures, not video or audio recordings, as part of our safety measures.”

So will people use Airtime, at least in the numbers that Airtime needs? With the removal of the X factor, and using Facebook as a platform, we think that they have a shot.