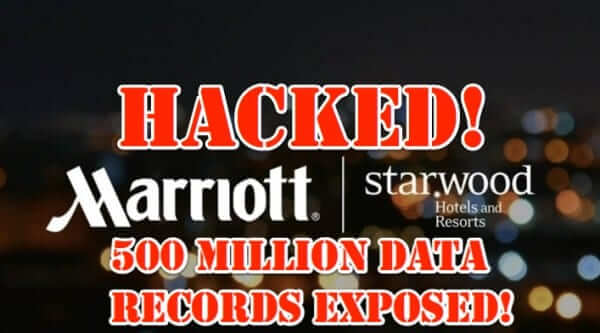 The Marriott hotel chain announced today that their Starwood property has suffered a massive data breach of as many as 500 million guest records. Note that even though the breach was discovered days earlier, they are announcing it on a Friday morning; Friday is known to be the day to announce things if you want them to get the least amount of attention.

This announcement comes just two days after the the announcement of the post office data breach. Earlier this year both Walgreens and Saks 5th Avenue announced data breaches. But at 500 million (that’s a half billion, folks!) data records exposed, the Marriott Starwood data breach is by far the most massive breach of the scope of this sort of data to date. (Yahoo had a data breach of up to 3billion user records in 2016, but is thought to have been limited to usernames, passwords, and dates of birth.)


If the fact that the Marriott data breach was discovered last week, but not announced until now annoys you, then the fact that they had been alerted to an issue in September will probably make you mad, and the fact that it had actually going on since 2014 should make you livid.

According to a statement released by Marriott today, “On September 8, 2018, Marriott received an alert from an internal security tool regarding an attempt to access the Starwood guest reservation database in the United States. Marriott quickly engaged leading security experts to help determine what occurred. Marriott learned during the investigation that there had been unauthorized access to the Starwood network since 2014. The company recently discovered that an unauthorized party had copied and encrypted information, and took steps towards removing it. On November 19, 2018, Marriott was able to decrypt the information and determined that the contents were from the Starwood guest reservation database.

But wait, there’s more. Because, while for most of the customers whose data was exposed (at 500million we have to imagine that means all of Starwood’s customers) the exposed data was limited (and we use the term loosely) to “some combination of name, mailing address, phone number, email address, passport number, Starwood Preferred Guest (“SPG”) account information, date of birth, gender, arrival and departure information, reservation date, and communication preferences” (uh, that’s a lot), many have also had their credit card details exposed.

Said Marriott CEO Arne Sorenson, “We deeply regret this incident happened. We fell short of what our guests deserve and what we expect of ourselves. We are doing everything we can to support our guests, and using lessons learned to be better moving forward.”

According to Marriot, if you have stayed at a Starwood property in the 5 years leading up to September of this year, your data is has been exposed (and quite likely already packaged for sale on the darkweb).

Marriott Starwood has engaged cyber risk mitigation firm Kroll to assist with this, and info.starwoodhotels.com forwards to answers.kroll.com where you can get the latest information.

Update Windows Immediately! NSA and Microsoft Announce Critical Security Flaw in Windows
250 Million Microsoft Customer Support Records Exposed
If You Get the "Complete Required Actions" Email from GoDaddy Do NOT Open It!
LA Plan to Give iPads to Students Massive Fail as High Schoolers Hack Them within a Week
Massive Capital One Breach of Data Stored on Amazon Affects Millions
Colorado Second State to Enact New Consumer Data Protection Law in 90 Days
Phone Number Reputation ("PhoneID Score") Being Created Based on Two-Factor Authentication
What is Blockchain and Why is it in the News Now?
20shares