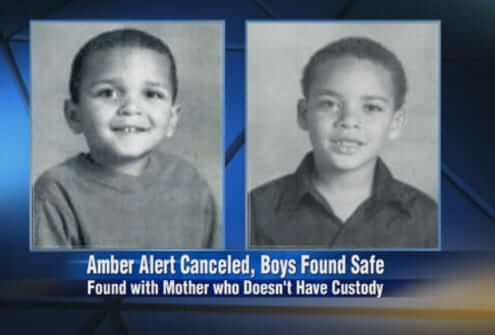 Yes, you read that right. A rant about Operation Amber and their alerts. Which now go out over the Internet in addition to lighting up signs on the highway. The vast majority of Operation Amber alerts are not about “stolen” children at all, but about custody disputes. This reduces the effectiveness of both the Operation Amber Alerts and the resources used to find these “stolen” children. If anybody can have an Amber Alert issued over a custody or visitation dispute, what happens to the alerts and resources needed for children who are truly victim to a non-family abduction?

This is a rant which has been a long time in coming. That’s because I see it nearly every day. You see, I subscribe to the Operation Amber Alert mailing list, and so I see each and every one of their Amber Alerts which go out.


That’s pretty amazing to think about, isn’t it? That there are Amber Alerts every single day. And that’s the issue. And that’s what this rant is about.

Perhaps even the average citizen could notice it, but having professional expertise in the area, I am particularly – painfully – aware of it.

The vast vast majority of Amber Alerts are about..wait for it… custody and visitation. And the children are in no danger whatsoever, at all.

Yep. Another example of a custodial parent working the system to their advantage, and making the non-custodial parent out to be a lowlife goodfornothing..in this case..criminal child abductor.

And another example of some power-grabbing custodial parent deflecting resources away from children and families who really need them just because they can. Just to show the non-custodial parent who’s boss.

As if they need to be shown that.

Don’t believe me? Sign up for the Operation Amber alerts. Look at the full text of each one. Notice how often the “suspect” is known, not a stranger, and how the last name of the “suspect” and the child are the same. [You can sign up here] NOTE: This link no longer works because the government has taken over the Amber Alert system, and now issues alerts directly to smartphones, automatically, through the [Page no longer available – we have linked to the archive.org version instead].

Still don’t believe me? Check out this “not an Amber Alert” from an Amber Alert website – in a rare case where the police actually declined to issue an Amber Alert for a domestic dispute (way to go, Mountain View, California), Operation Amber took the police department to task, and posted a web alert anyways:

Amber Alert Denied For International Kidnapping By A Father

Americas Amber Alert News Center (California USA NA) TAA — Mountain View police are asking for the public’s help in locating a 3-year-old boy believed to have been abducted by his father.

Salvador Garrido called the boy’s mother telling her he would not be returning the child to her Sunday as promised. He said he was in Mexico or on his way there with the boy, Gianmarco Garrido.

Gianmarco had been visiting with his father since Saturday with the permission of the mother, who has full legal custody of the child. Amber Alert was denied due to the lack of danger believed to exist by the Police.

This appears to be interference with child custody and international parental kidnapping. This should warrant Amber Alert due to the fact the father is about to endanger the child by making an illegal crossing into Mexico.

Crossing the border is considered a hazard event to adults by both governments. Allowing the father to not get DOT signs while he evades capture is wrong and violated the childs human rights. Gianmarco and his father may be traveling in a car similar to a black ’93 or ’94 Nissan two-door 280Z or 300.

Mountain View police turned the case over to the Santa Clara County District Attorney’s Office this morning. Anyone with information on the whereabouts of Salvador Garrido and his son is asked to contact Mountain View police at (650) 093-6395 or Deputy DA Julianne Sylva at (408) 792-2523.”

…one of their parents.

The vast majority of child “abductions” are, in fact, simply custody disputes. They belong in the courts. Not using up the resources and detracting attention away from, and desensitizing people to the plight of, those who really need them – children whom are in fact abducted by strangers or others who pose a serious threat. Though relatively rare, it is these children for whom an Amber Alert should be issued, not those who are with one of their parents who decided to keep them a little too long during their visitation, or who are challenging the custody of the other parent.