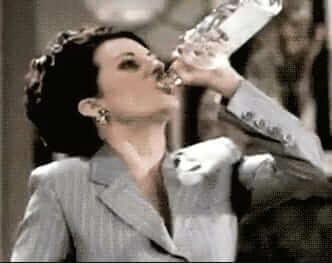 50 Shaes of Grey author E.L. James (real name: Erika Mitchell, nee Leonard) got more than she bargained for when she opened herself up to questions from her fans on Twitter, taking questions with the Twitter hashtag #AskELJames.

It all started with this tweet from E.L. James’ 50 Shades UK publisher, Random House, which said “Mon 29 Jun at 6pm UK time, @E_L_James will be doing a live chat with @TwitterBooks. Use #AskELJames to ask a question.” 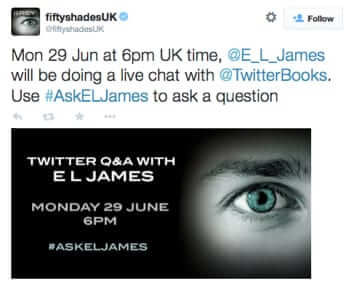 We’re not sure what sort of questions E.L. James was expecting on Twitter, but we think that she and her publisher should have been expecting what happened (but clearly weren’t or this would never have been an event).

Below are some of our favourites – but you can see them all on Twitter here.

However, some of the questions which took E.L. James to task took on a more serious tone, such as:

James did not respond to any of the serious questions, and apparently as often as not responded to the others by blocking the person who tweeted the question.

Which leads to pretty much our two favourite Tweets in the entire #AskELJames debacle:

By the way, if you couldn’t bring yourself to see the movie at the theatre, but must see it, you can watch it in the privacy of your own home by buying Fifty Shades of Grey on Amazon here

Or you can buy the book here

Are App Icons Giving Us Cognitive Overload As They Fight For Our Attention?
Federal Agencies to Include Your Social Media Accounts in Security Clearance Background Check
Inappropriate Twittering, Facebooking Leads to Criminal Appeals in Trials
How To Sell on Social Media by Turning Followers Into Customers
Twitter Bans Competing Social Networks
How to Live Life Online When You Have To
How to Know If You Are Interacting With a Bot
UK Passes Law Making Domestic Violence over Social Media a Crime
Share the knowledge

Number of people who have enjoyed this article: 1,512